We planned to launch the new Twitter API today. But given the security incident we discovered yesterday, the timing of our launch no longer made sense or felt right.

We have no evidence the incident had anything to do with our API, but we decided to move the launch to a more appropriate time.

So rather than say nothing, especially since we’ve been teasing #TwitterAPI all week, here’s what we will say: developers play a key role in building the future of Twitter. The new API is going to help us better serve all of you. And we are so excited to get it to you soon.

You can read more about what we have planned below. We’ll update this post and share more in the coming days.

Today, we’re introducing the new Twitter API. Rebuilt from the ground up to deliver new features faster, today’s release includes the first set of new endpoints and features we’re launching so developers can help the world connect to the public conversation happening on Twitter.

Read on for more about what we’re building, what’s new about the Twitter API v2, what’s launching first, and what’s coming next.

Building in the open and what we’ve learned

Your feedback has been essential in helping us define our vision and roadmap for the new Twitter API. From Tweets to focus groups, you have shared a ton of feedback with us over the past few years about what you need out of the Twitter API and what we can do better. We also learned a lot through Twitter Developer Labs where you’ve been sharing real-time feedback on the new API features we’ve tested in the open.

We’ve always known that our developer ecosystem is diverse, but our API has long taken a one-size-fits-all approach. Your feedback helped us see the importance of making the new Twitter API more flexible and scalable to fit your needs. With the new API, we are building new elevated access options and new product tracks, so more developers can find options to meet their needs. More on that below.

We also know it’s important to be able to plan ahead, and we want to do a better job of sharing our plans with you in advance. Going forward, we’ll share more of what’s coming next on our public roadmap (updates coming soon). We’ll also share a Guide to the future of the Twitter API for more about what to expect as we roll out the new API. We have a lot planned, and it will evolve and improve as we continue to hear from you.

A new foundation– The new API is built on a completely new foundation — rebuilt for the first time since 2012 — and includes new features so you can get more out of the public conversation. That new foundation allows us to add new functionality faster and better than we’ve done in the past, so expect more new features from Twitter to show up in the API.

With this new foundation, developers can expect to see:

New access levels– With the new Twitter API, we’re building multiple access levels to make it easier for developers to get started and to grow what they build. In the past, the Twitter API was separated into three different platforms and experiences: standard (free), premium (self-serve paid), and enterprise (custom paid). As a developer’s needs expanded, it required tedious migration to each API. In the future, all developers — from academic researchers to makers to businesses — will have options to get elevated access and grow on the same API. 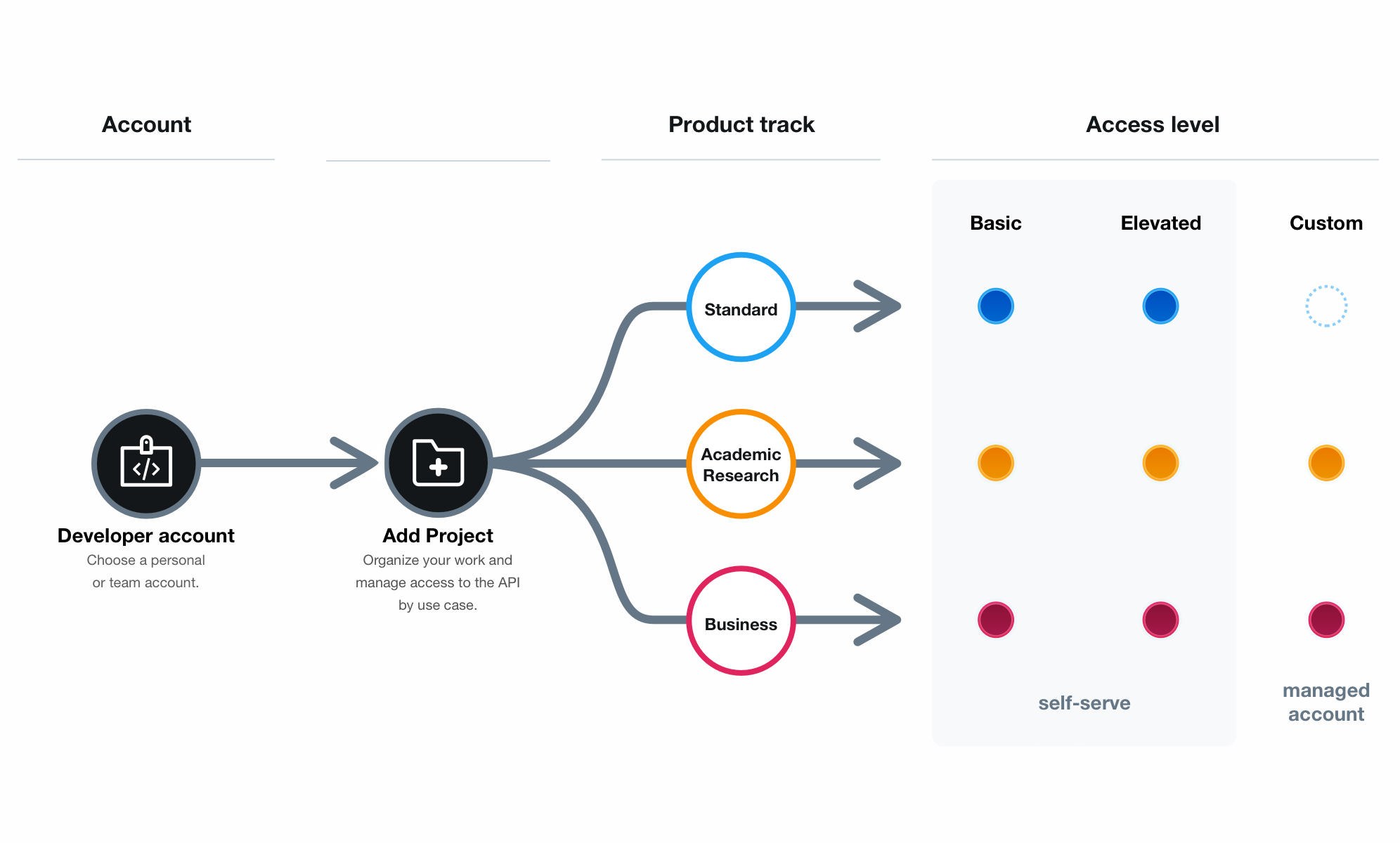 New product tracks– We love the incredible diversity of developers who use our API. Our plan is to introduce new, distinct product tracks to better serve different groups of developers and provide them with the right experience and support for their needs, along with a range of relevant access levels, and appropriate pricing (where applicable). To start, these product tracks will include:

A new developer portal– To help you get the most out of the new API, we’ve also designed and built a new developer portal. This is where you can get started with our new onboarding wizard, manage Apps, understand your API usage and limits, access our new support center, find documentation, and more to come in the future.

With the new Twitter API, we hope to enable more:

One of the most common reasons developers use the Twitter API is to listen to and analyze the conversation happening on Twitter. So, soon we’ll release Early Access to an initial set of new endpoints for developers to:

All API features we’re releasing first will be available in our new – always free – Basic access level. For most developers, Basic access will provide everything you need to get started and build something awesome.

Eventually, the new API will fully replace the v1.1 standard, premium, and enterprise APIs. Before that can happen though, we have more to build, which is why we are referring to this phase as Early Access. It’s a chance to get started now and get ahead.

Unlike Twitter Developer Labs which hosts our experiments, everything in the first release will be fully supported and ready for you to use in production.

To get started with Early Access to the new Twitter API, you’ll need a developer account. If you don’t have one yet, apply to get started.

This is just the beginning. We’re sharing our public roadmap to keep you updated on our vision for the API, along with options to share feedback so that we can continue to learn from you along the way and so you can plan for what’s to come. On deck: full support to hide (and unhide) replies, and free Elevated access for academic researchers.

Developers like you push us and inspire us every day. Your creativity and work with our API make Twitter better for people & businesses, and make the world a better place. Thanks for your partnership on the journey ahead.

Thread by @jc_stubbs: An interesting…

Improving performance of PHP for…