This blog post examines a 1980s chip used in a Soyuz space clock.
The microscope photo below shows the tiny silicon die inside the package, with
a nice, geometric layout.
The silicon appears pinkish or purplish in this photo, while the metal wiring layer on top is white.
Around the edge of the chip, the bond wires (black) connect pads on the chip to the chip’s pins.
The tiny structures on the chip are resistors and transistors. 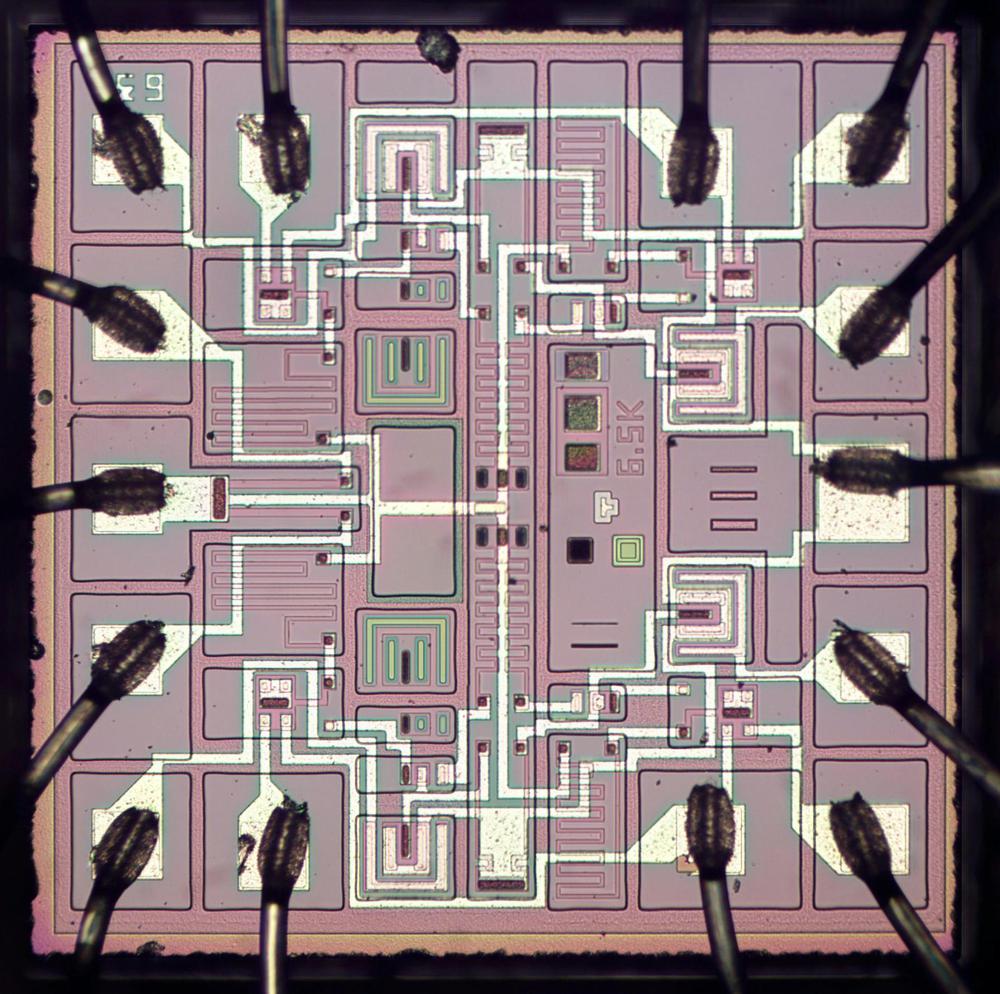 The chip is used in the clock shown below.
We recently obtained this digital clock that flew on a Soyuz space mission.1
The clock displays the time on the upper LED digits and provides a stopwatch on the lower LEDs.
Its alarm feature activates an external circuit at a preset time.
I expected that this clock would have a single clock chip inside, but
the clock is surprisingly complicated, with over 100 integrated circuits on ten circuit boards.
(See my previous blog post for more information about the clock.) 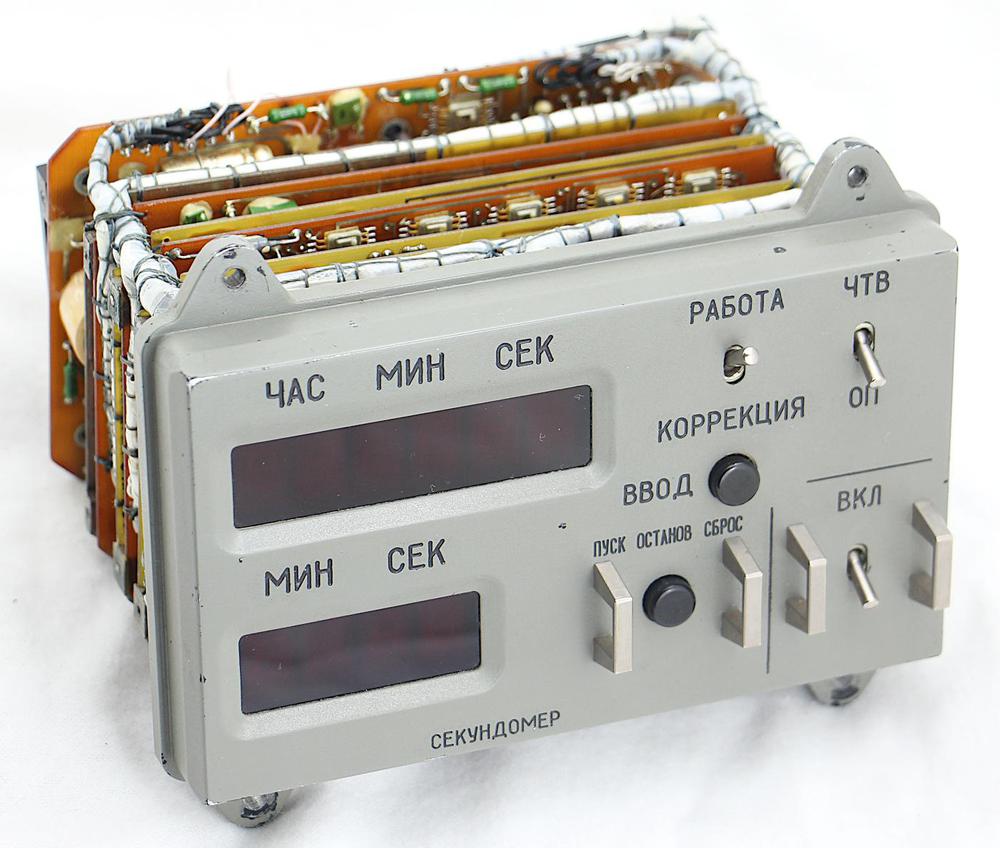 Space clock from Soyuz with the cover removed. 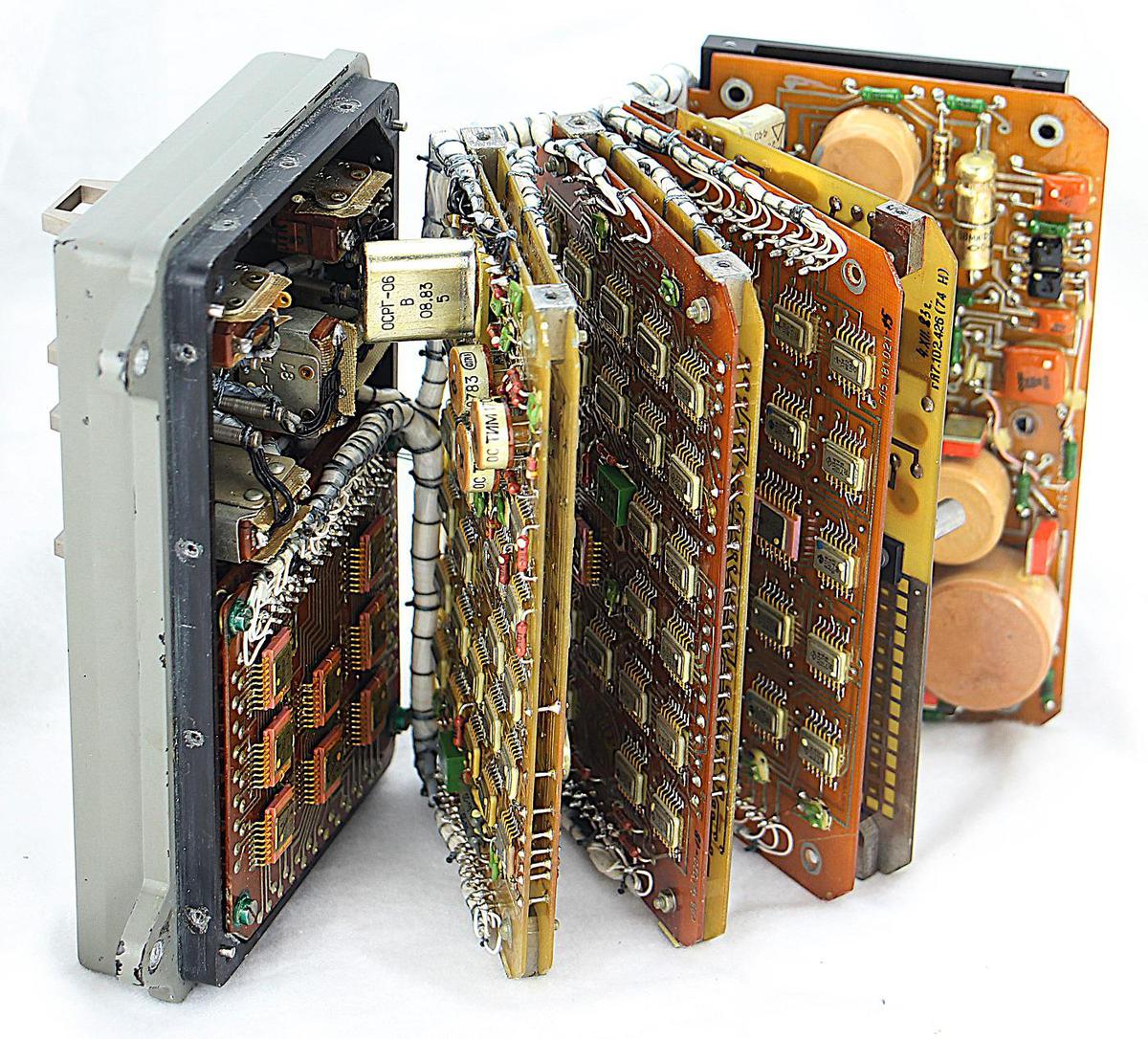 The wiring bundles are arranged so the boards can swing apart. The quartz crystal that controls the clock’s timing is visible in the upper center. The clock’s power supply is on the boards at the right, with multiple round inductors.

The clock is built from TTL integrated circuits, a type of digital logic that was popular
in the 1970s through the 1990s because it was reliable, inexpensive, and easy to use.
(If you’ve done hobbyist digital electronics, you probably know the 7400-series of TTL chips.)
A basic TTL chip contained just a few logic gates, such as 4 NAND gates or 6 inverters, while
a more complex TTL chip implemented a functional unit such as a 4-bit counter.
Eventually, TTL lost out to CMOS chips (the chips in modern computers), which use much less power and are much
denser.

The photo below shows a chip with its metal lid removed.
The tiny silicon die is visible in the middle, with bond wires connecting the die to the pins.
This integrated circuit is very small; the ceramic package is 9.5mm×6.5mm, considerably smaller than a fingernail.
To open up a chip like this, I normally put it in a vise and then tap the seam with a chisel.
However, in this case, the chip decapped itself—while I was looking for a hammer, the top suddenly popped off due to the pressure
from the vise. 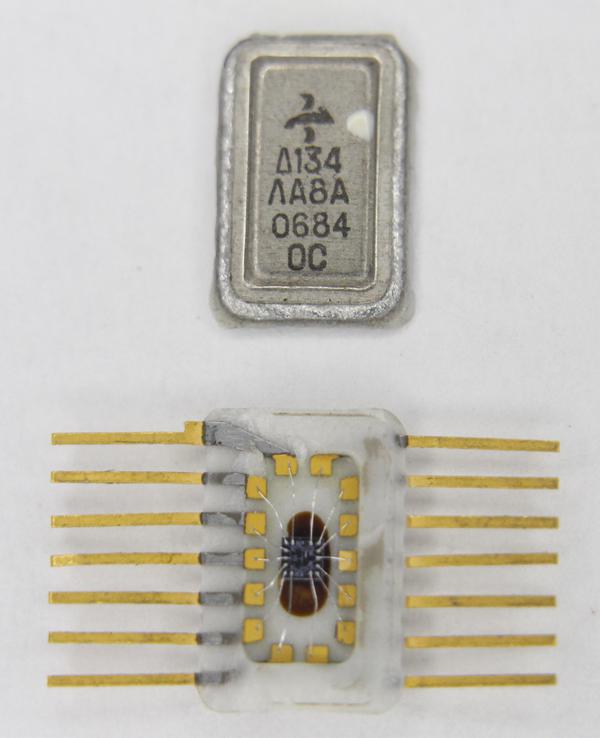 The integrated circuit with its metal lid removed, showing the tiny silicon die inside.

The chip I’m examining has the Cyrillic part number 134ЛА8 (134LA8)6.
It implements four open-collector NAND gates, as shown below.4
The NAND gate is a standard logic gate, outputting a 0 if both inputs are 1, and otherwise outputting a 1.
An open-collector output is slightly different from a standard output.
It will pull the output pin low for a 0, but for a 1 it just leaves the output floating (“high impedance”).5
An external pull-up resistor is required to pull the output high for a 1.
The clock uses three of these chips: one in the quartz crystal oscillator circuit, and another functioning as inverters in another part of the clock.3 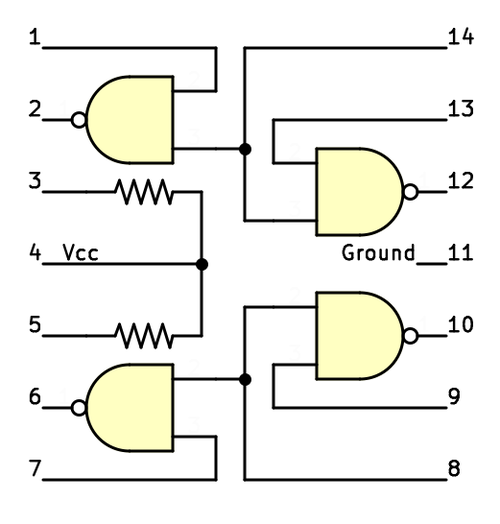 Under the microscope, the transistors and resistors of the integrated circuit are visible.
The silicon die appears in shades of pink, purple, and green, depending on how different regions of the chip have been “doped”.
By doping the silicon with impurities, the silicon takes on different semiconductor properties, making N-type and P-type silicon.
On top of the silicon, the white lines are metal traces that wire together the components on the silicon layer.

The photo below shows how a resistor appears on the silicon die.
A resistor is formed by doping silicon to form a high-resistance path, the reddish line below. The longer the path, the higher the resistance, so
the resistors typically zig-zag back and forth to create the desired resistance.
The resistor is connected to the metal layer at both ends,
while another metal passes over the resistor shown below. 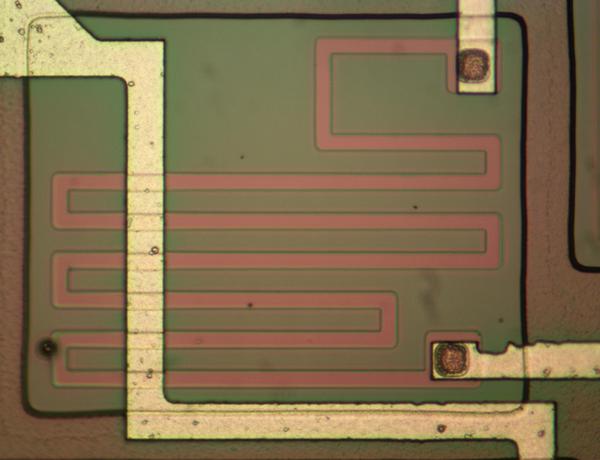 A resistor on the integrated circuit die. 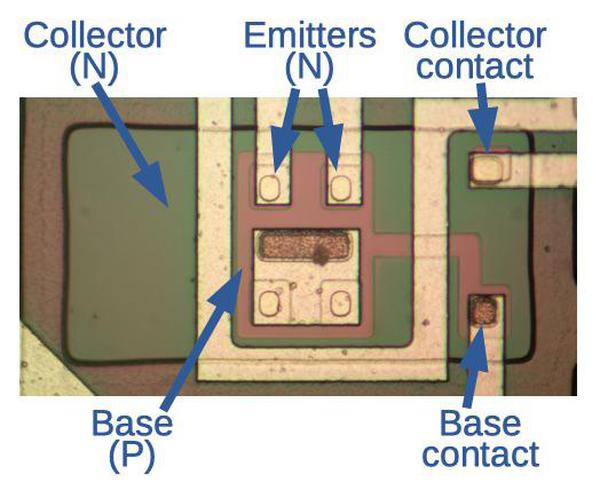 An input transistor on the integrated circuit die. The transistor is surrounded by an isolation ring (dark color) to separate it from the other transistors.

TTL circuits typically used transistors with multiple emitters, one for each input, and this can be seen above.
A multiple-emitter transistor may seem strange, but it is straightforward to build one on an integrated circuit.
The transistor above has two emitters wired up.
Close examination shows there are four emitters, but the two lower unused emitters are shorted to the base.

The output transistors on the chip produce the external signal from the chip, so they must support much higher current than the
other transistors.
As a result, they are much larger than the other transistors.
As before, the transistor has a large P-type collector region (green), with a base on top (pink), and then emitter on top of the base.
The output transistor has long contacts between the metal layer and the silicon, rather than the small square contacts of the previous transistor.
The emitter (wired in a “U” shape) is also much larger.
These changes allow more current to flow through the transistor.
In the photo below, the transistor on the left has no metal layer, so its silicon features are more visible.9
The transistor on the right shows the metal wiring. 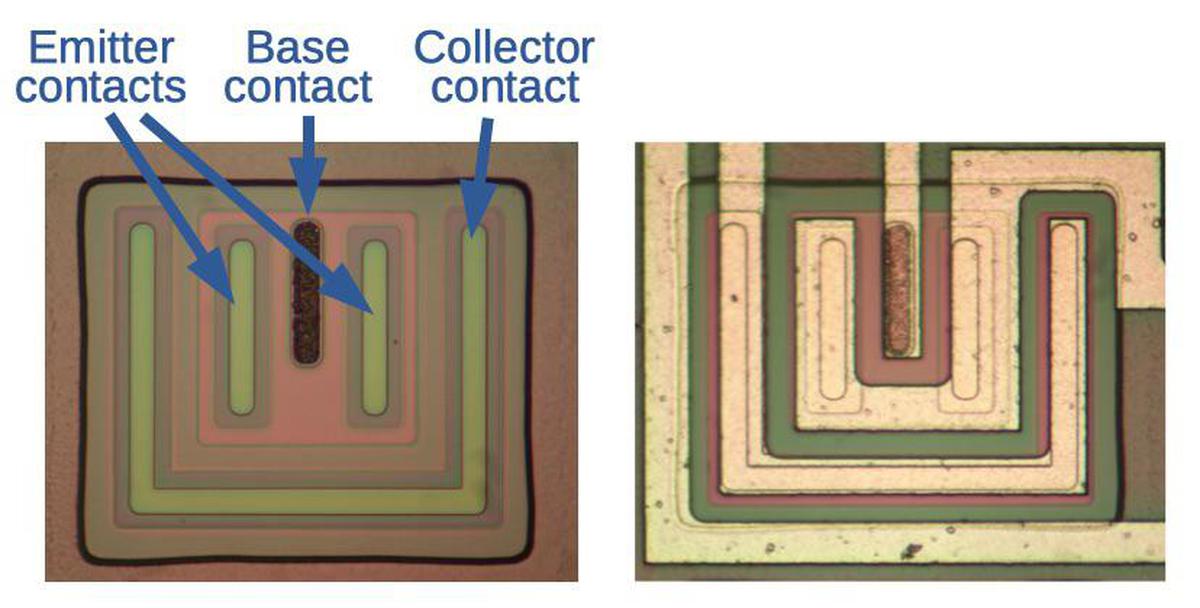 Two output transistors on the integrated circuit die. The one on the left is unused, while the one on the right is wired into the circuit by the metal layer.

How a TTL NAND gate works

The schematic below shows one of the open-collector NAND gates in the chip.
In this paragraph, I’ll give a brief explanation of the circuit; you can skip this if you want.10
To understand the circuit, first assume that an input is 0.
The current through resistor R1 and the base of transistor Q1 will flow out through the transistor’s emitter and the low input.
Transistor Q2 will be off, so R3 pulls Q3’s base low, turning Q3 off.
Thus, the input will float (i.e. open-collector 1 output).
On the other hand, suppose both inputs are 1.
Now the current through R1 can’t pass through an input so it will flow out the collector of Q1 (i.e. backward) and into Q2’s base, turning on Q2.
Q2 will pull Q3’s base high, turning on Q3 and pulling the
output low.
Thus, the circuit implements a NAND gate, outputting 0 if both inputs are high.
Note that Q1 isn’t acting like a normal transistor, but instead is “current-steering”, directing the current from R1 in one direction or the other. 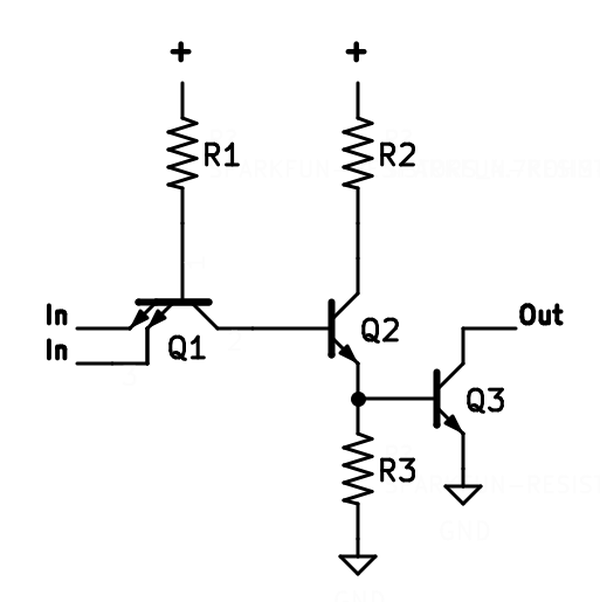 Schematic of one gate in the integrated circuit. This is an open-collector TTL NAND gate.

The diagram below shows the components for one of the NAND gates, labeled to match the schematic.
(The three other NAND gates on the chip are similar.)
The wiring of the gate is simple compared to most integrated circuits; you can follow the metal traces (white) and match up the wiring with the schematic.
Note the winding path from the ground pad to Q3.
Q1 is a two-emitter transistor while Q3 is a large output transistor. Two unused transistors are below Q2. 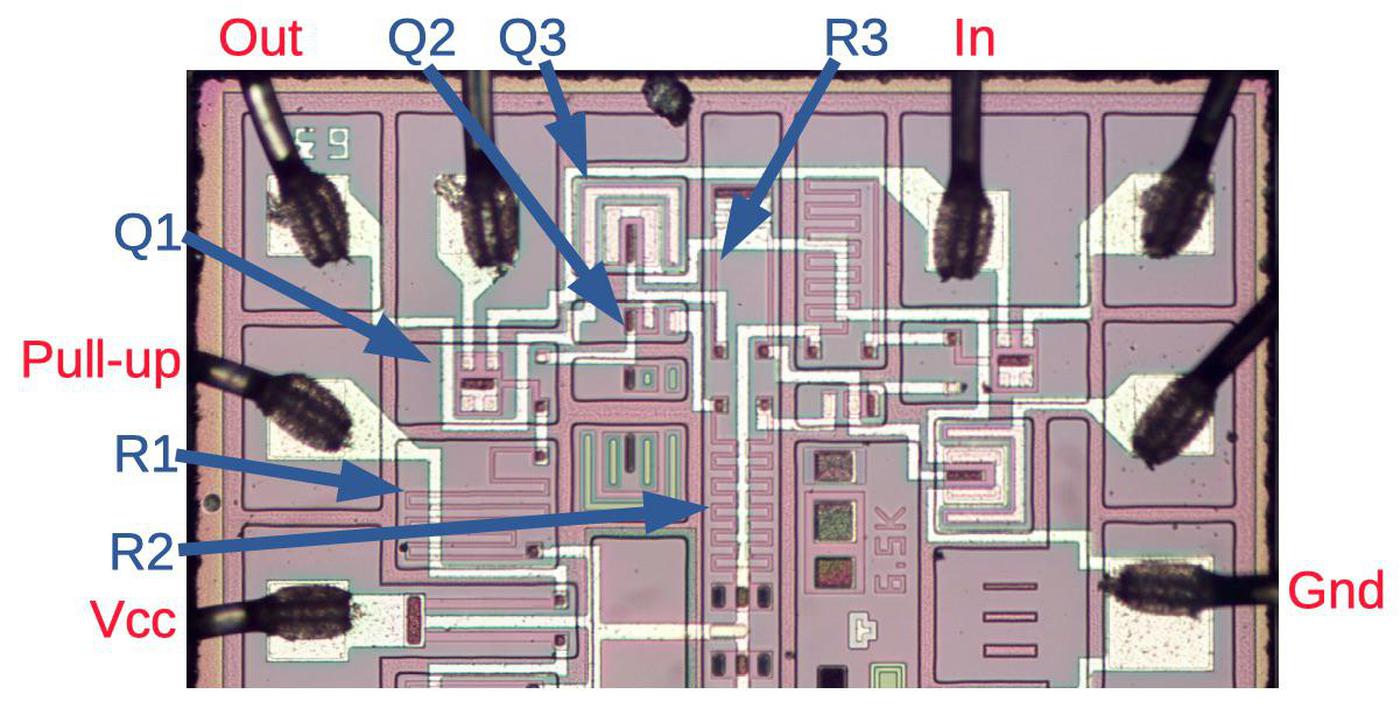 The die, showing the components in a gate. Components are labeled (blue) for one of the NAND gates, while pins are labeled in red. The pull-up resistors are above and below the Vcc wire.

This Soviet chip from 1984 is simple enough that the circuitry can be easily traced out,
illustrating how a TTL NAND gate is constructed.
The downside of simple chips, however, is that the Soyuz clock required over 100 chips to implement basic clock functionality.
Even at the time, single chips implemented wristwatches and alarm clocks.
Now, modern chips can contain billions of transistors, providing an extraordinary amount of functionality, but
making the chip impossible to understand visually.

My previous blog post discussed the clock’s circuitry in detail and
I plan to write more about the clock,
so follow me @kenshirriff (or on RSS) for details.
Until then, you can watch CuriousMarc’s video showing the disassembly of the space clock:

How to Stay in Touch…

Engineers Made a DIY Face…

The Ibuprofen Debate Reveals the…

The Heady, Intricate Beauty of…