TL;DR: Down and to the right

I wasn’t going to do this post until I learned IBM PR is out browbeating reporters (one of the rare activities where the company is still world class) for being “too harsh” by including actual performance metrics in stories about IBM’s CEO transition. So I shall rally to the defense of the fourth estate (who tippytoed around the performance issue if anything) and help frame the outgoing CEO’s legacy (TL:DR missed the cloud transition).

Ginny Rometty was CEO of IBM for less than a decade, but kudos to the company for an uncharacteristic bout of out-performance by packing more than a decade’s worth of decline into just eight years. The “lost decade” of this post’s title is perhaps charitable as it implies they merely went sideways, when in fact the questions surrounding the company are now existential. I suggested IBM was not going to make the cloud computing transition in early 2013, and they have gone on to make that warning look very prescient.

Down and to the right. Revenue declined 28%, a staggering sum of nearly $30 billion dollars. That is more than the combined revenues of Adobe and Salesforce (and then some). Down and to the right. Net income declined 41% by almost $6.5 billion over those eight years (though it has rebounded a little). 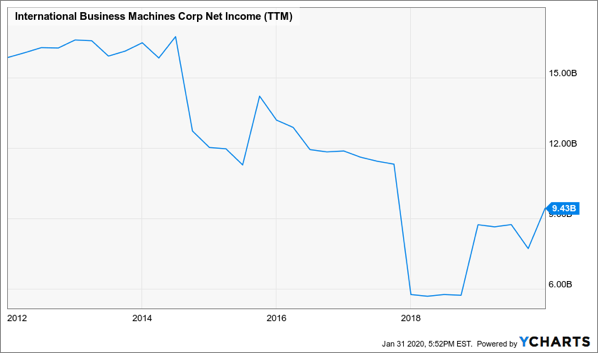 Down and to the right. Free cash flow held up better than most of the financial metrics, only declining 18%. 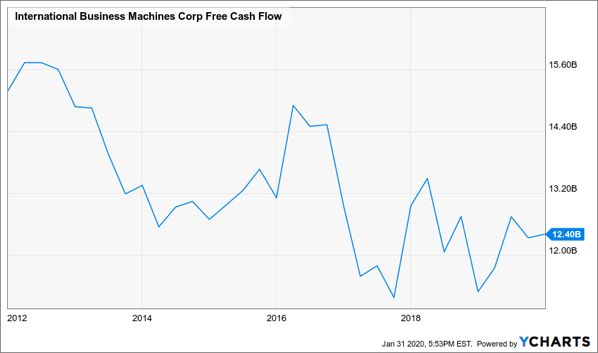 Down and to the right. IBM lost over $95 billion of capitalization, a decline of 44%. That sum is more than the entire capitalization of a 3M, Lowe’s, Sony, or UPS, and just shy of Starbucks. 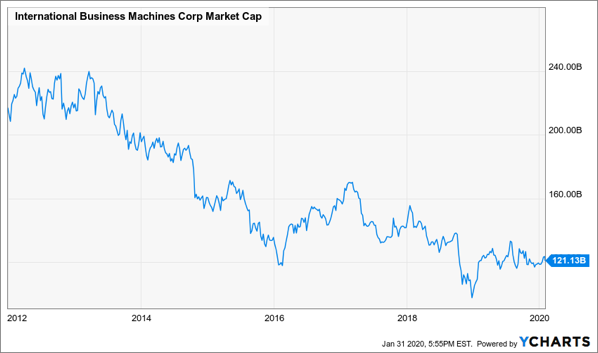 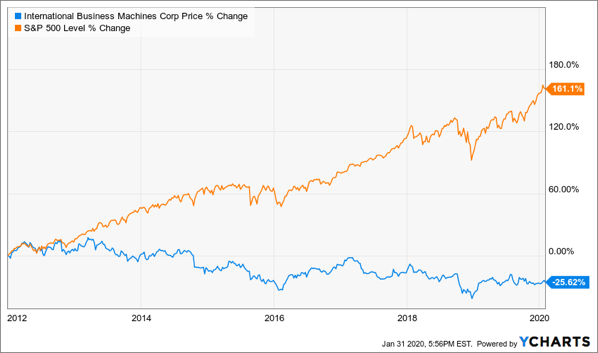 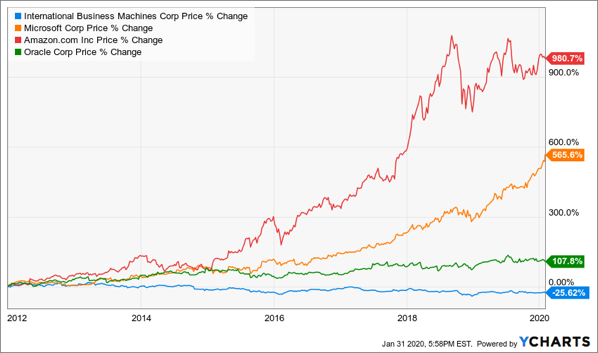 Down and to the right. CAPEX has been the signature tell in the cloud era, separating the clouds from the clowns. IBM’s annual CAPEX declined by nearly half in this period, going from $4.67 billion to $2.37 billion, with 2019 seeing a precipitous decline of 36%. IBM spent less than $30.8 billion on CAPEX during Rometty’s tenure, just barely more than what Amazon spent on CAPEX in 2019 alone ($30.6 billion). 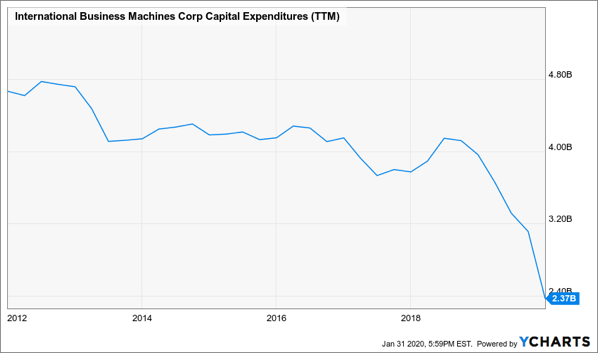 While the IBM financial roadmap came to a screeching halt several years ago, IBM still managed to spend more on stock buybacks ($55 billion) during Rometty’s tenure than CAPEX, even as its market capitalization shrank by over $95 billion. 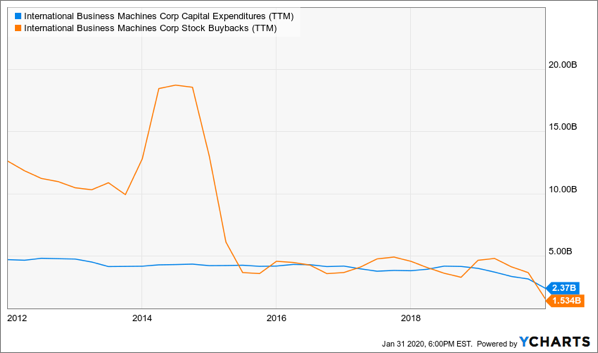 Finally, one that is up and to the right! The company added over $34 billion in debt (the Red Hat acquisition required $20 billion in new debt). 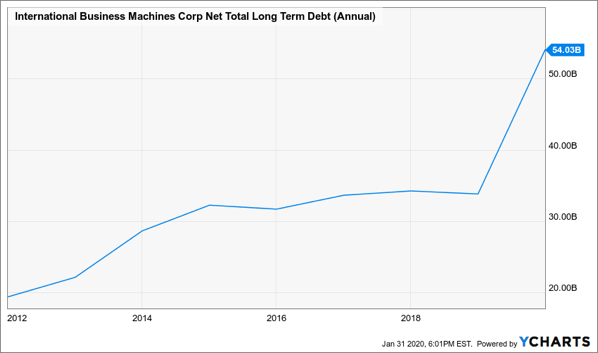 Rometty didn’t inherit a great hand. Her predecessor Sam Palmisano hollowed IBM out and turned it into a financial engineering company as opposed to an engineering engineering company. Palmisano focused the company on an EPS roadmap instead of a product roadmap. And, as an executive who rode the rise of IBM Global Services to the CEO job, he cemented the firm’s shift from a technology company to IT services. Palmisano also started IBM’s massive offshoring that continued under Rometty (no company has moved more jobs overseas than IBM, which now has over 200,000 employees in “lower cost” offshore locations).

While Palmisano set the stage, Rometty took too long to recognize the critical issues facing the company and made her own fundamental mistakes. She stuck with the $20 EPS target despite the company’s pressing need to make the transition to cloud computing. Even Wall Street gave up on the sacred $20 EPS roadmap before Rometty did. Her consulting background and lack of product experience also looks decisive. It is easy to see how a consulting mindset would see cloud as something they already did (outsourcing customer workloads) as opposed to a new computing platform. And the big bet on a ridiculously over-hyped Watson could make sense if you saw incomplete and underperfoming products as merely the top of a consulting sales funnel. Certainly, the TV advertising claiming Watson would cure cancer had to be a CEO decision, as no doubt was the subsequent if belated recent decision to disappear the Watson brand. After years of rearranging the financial deckchairs with segment redefinitions and “strategic initiatives”, plus non-sequiturs like “blockchain”, the company has all but admitted it cannot compete with the public clouds. Instead, the company has embraced a backwards-looking, consulting-led strategy they are calling “hybrid cloud” (a.k.a. “legacy 4eva!”) in hopes of confusing the market about their relevance in the cloud era (just check out their latest TV ads). The $34 billion Hail Mary that is the Red Hat acquisition is a lot to pay for a proprietary Kubernetes distribution.

But don’t worry about Ginny. Despite the harsh realities charted above, she’s been extraordinarily well compensated, netting over $100 million in stock (not counting salary and benefits). And we have yet to learn the details of her exit package (Palmisano’s was ~$250 million).

The biggest mystery is not why it took the IBM board so long to replace Rometty (though that is certainly a mystery), but why they decided to replace her with another IBM lifer in Arvind Krishna while all but dubbing him “interim CEO”. By elevating former Red Hat CEO Jim Whitehurst to President, the company has signaled he’s up next and the clock is ticking on Krishna even before he has served a day as CEO. Why isn’t Whitehurst ready for the big job today? Does he need to improve his COBOL skills? Or does this portend IBM being split up? I’m not even remotely an Armonk Kremlinologist, but they don’t have a lot of time left to get their act together.