This post is part of a series on the retro SEGA SC-3000 personal computer. In the next part I will give an introduction to writing BASIC on this machine. In the last part we will make a simple shoot-em-up video game and persist it to audio cassette.

It was an otherwise average hot summers evening in Melbourne, Australia when I heard a “knock, knock” at the door.

I saw my neighbour standing in front of me with a large plastic bag in his hand. Upon closer inspection, I could see the plastic bag seemed to contain a stack of old video games and assorted peripherals. My eyes lit up a bit but I tried to hold my excitement.

He went on to tell me that he was doing some demolition work in an abandoned house in the outer suburbs when he’d stumbled upon an “old computer or something”. He knew I was into that type of thing so he asked if I wanted it.

Did I want it?! Hell yes, I did. I’ve always been a huge fan of retro computer gear. Finding something lke that in an abandoned house is like treasure to me!

“OK, compose yourself Andrew”, I thought to myself.

I ran inside and grabbed a ~$300 bottle of Dom Pérignon that I’d been given when I started my last job. After some convincing, he took the bottle and we called it a fair trade.

When I got inside and emptied the contents of the plastic bag on my loungeroom floor, I saw it was a lot more than I’d initially realised. In the bag there was a retro minicomputer, some RF cables, an AC adapter, five software cartridges, a joystick and a game pad. All boxed and in near mint condition. It was like a time capsule from simpler times. 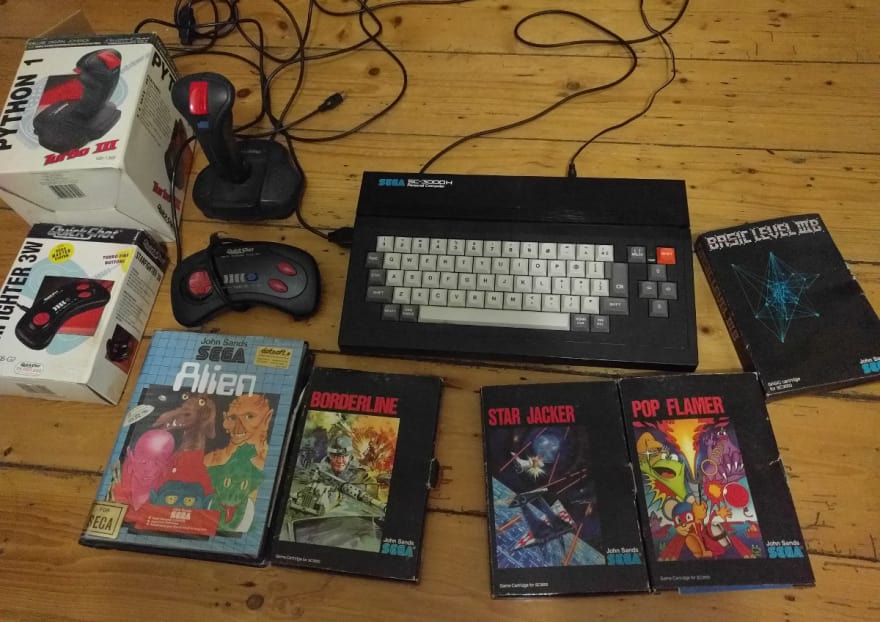 One thing that really stood out to me was the logo on each of the games and the computer itself: SEGA.

Since when did SEGA make home computers?

When I was a little kid, the first video game console I’d owned was a SEGA Master System (or Mark III in Japan). It was a great little system with a good catalogue of games developed for it. What I did not know, however, was that before the Genesis, before the Saturn and even before the Master System – SEGA released a home computer called the SC-3000.

Amazing… But there was also something else that stood out. The machines full name was the “John Sands SEGA SC-3000H Personal Computer”.

For those who are not aware, John Sands is an Australian supplier of greeting cards and gift wrap. Just take a look at their website – it doesn’t look much like a computer distributor, does it? Well, sure enough, in the early 80’s John Sands really did enter the fledgling home computer market when they helped SEGA distribute this machine and a video game equivalent called the SG-1000. 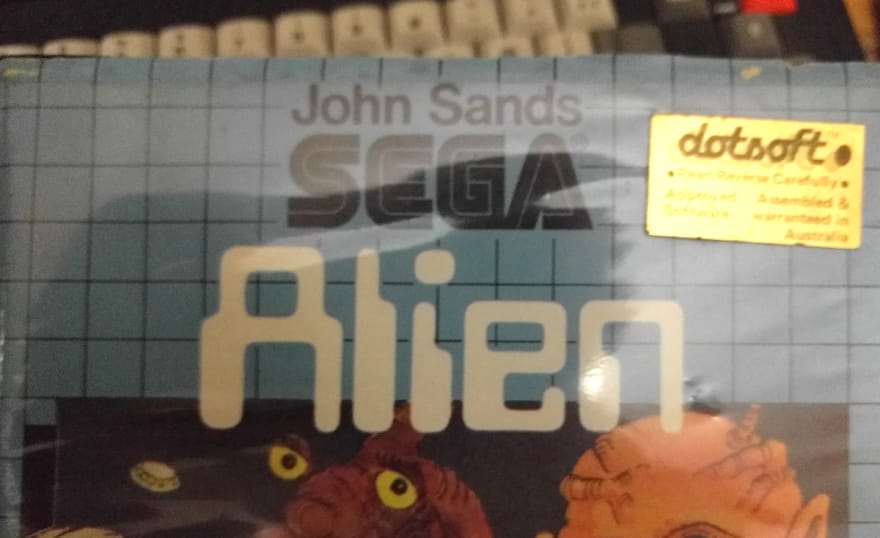 The reason you’ve probably never heard of this machine is because the SEGA SC-3000 was released in just a few markets: Japan, Australia, New Zealand, France, Italy and Finland.

It did not fare particularly well in Europe but saw some minor success in Japan and Australia/NZ. Infact, the SC-3000 represents SEGAs first and last foray into the personal computer market. And although the SC-3000 was marketed as a tool primarily for home business and educational use, it was seemingly only ever used to play video games. What a surprise…

The machine was released in two models: The SC-3000 (with rubberized keys) and the SC-3000H which boasts a fully mechanical keyboard (and a pretty nice one, I must say!). Each market seems to have got it’s own colour variant, also. All of the John Sands Australian models are black. Supposedly the white models are the rarest. 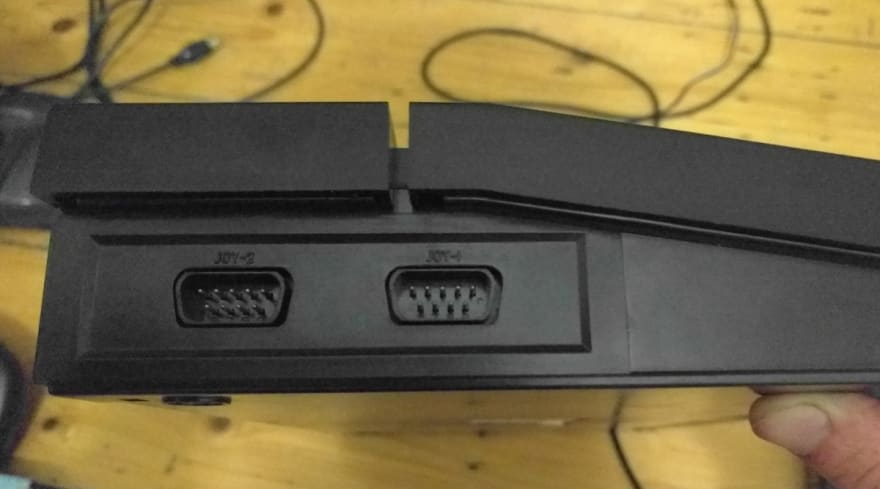 On the back there is a power switch, a DC-in, composite video port, printer port, audio cassette in/out ports (I’ll discuss those a bit more later) and an RF connector port for plugging into your television.

On one side there is a large space to put software cartridges. On the other there is two standard joystick ports.

On the inside there is an 8-bit NEC D780C-1 CPU running at 4 MHz. I believe it’s identical to the more well known Z80 CPU that saw massive use during the 80s in scientific calculators and many arcade machines.

Embedded in the machine is just a measly 2Kb of RAM. Along with 16Kb of VRAM provided for the video display processor (a Texas Instruments TMS9929A). Perhaps a surprise to some people, but the software cartridges actually provided their own RAM (anywhere from 1Kb up to 32Kb). While a game was running, it would read and write via the RAM on it’s own cartridge. So, unfortunately that means saving your game progress and coming back later was simply out of the question!

And how about the software?

The SEGA SC-3000 has no operating system. In fact, if you turn it on without a cartridge stuffed in the side of it you will get just a blank screen of nothingness.

As I mentioned previously, the main way of distributing software was via cartridge. The SC-3000 cartridge slot was also compatible with games for the earlier SG-1000 and the SEGA “my card” format.

I found out the hard way that these cartridges tend to get dirty (even when left in their box) and so I spent quite some time cleaning them with cotton buds before I was able to get each to work. It was very nostalgic to sit in my living room blowing into cartridges and wiggling them around. It definitely brought back memories of my childhood! 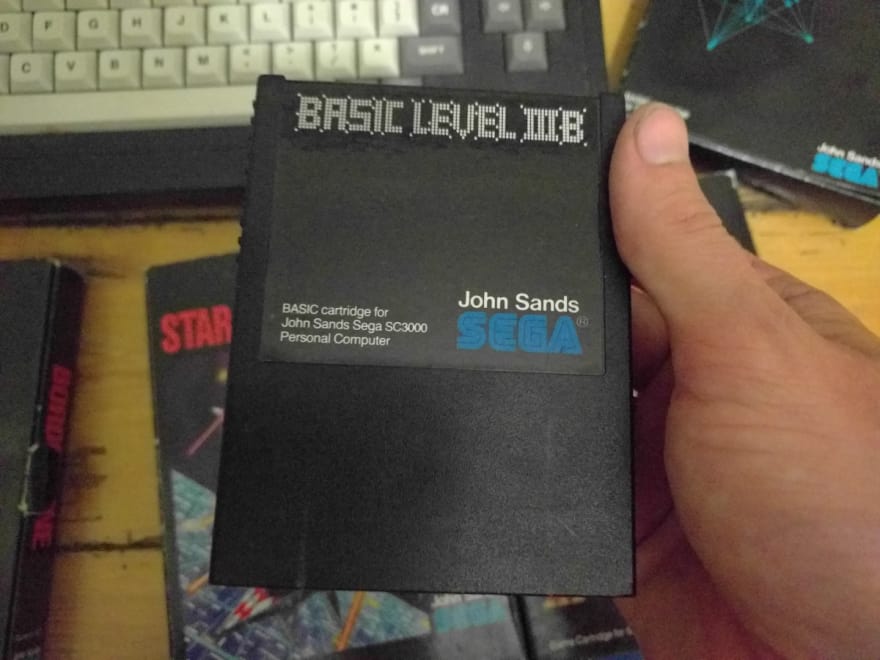 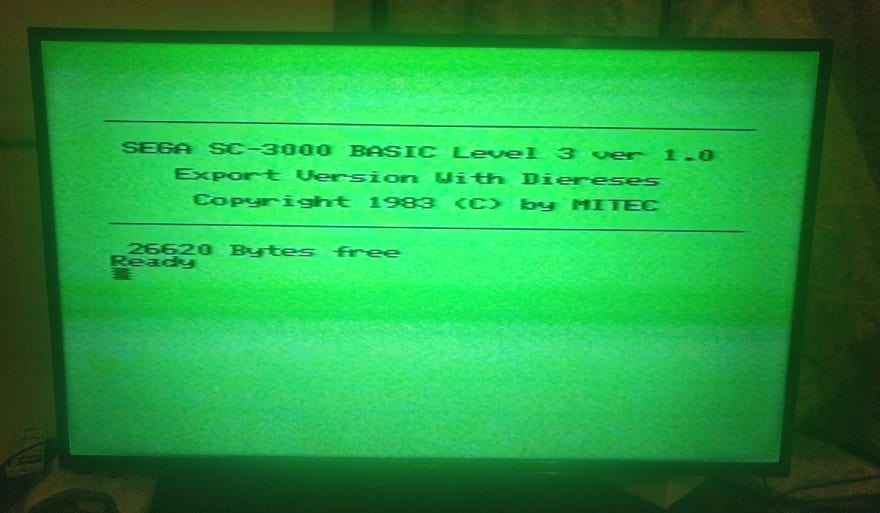 I believe there was less than 100 officially released games for the SC-3000/SG-1000 systems, which I can only assume means they are probably pretty rare nowadays. Although, somewhat amazingly, there is a group of fans who have provided many of the tapes dumps as uncompressed audio files on over at the SC-3000 Survivors website. This means you can actually play many lost SEGA games on this retro machine via the Internet. Wow!

How do I hack on this thing?

Like many home computers of the time, the SC-3000 was intended to be programmed via the BASIC programming language. From my research, it seems to me that all models were sold with a BASIC cartridge. There were a few separate BASIC cartridges available, the difference lying in the amount of RAM available. The most “basic” release had just 1Kb (of which 512 bytes were taken by the BASIC runtime itself). The other releases has 16Kb and 32Kb, respectively. Many adverts of the SC-3000 at the time boasted of 48Kb of RAM – but this would only be the case if you also bought the most expensive BASIC cartridge!

The SC-3000 also allowed for one relatively interesting means of I/O in conjunction with the BASIC cartridge – via standard audio cassettes. The software was written to the tape bit-by-bit, each taking just under 1ms (833.3μs) to record. This resulted in roughly 6.8 seconds of audio per kilobyte of data. So reading a 16Kb game from cassette and onto the memory on the BASIC cartridge would take nearly 2 minutes… 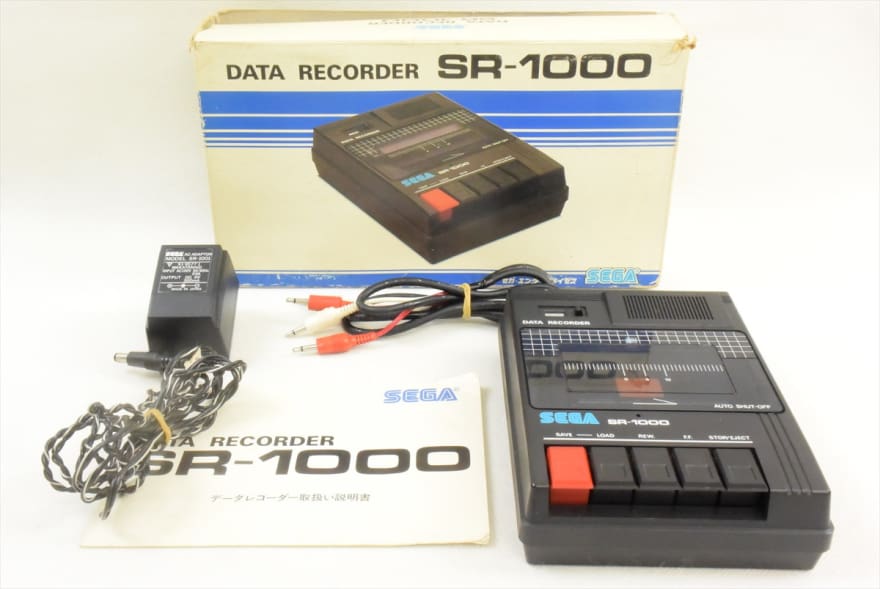 Once your cassette player had been plugged into the SC-3000 via 3.5mm audio cable, it could be read into memory and executed very simply:

Hacking, of course. But for that we will have to wait until the next post.